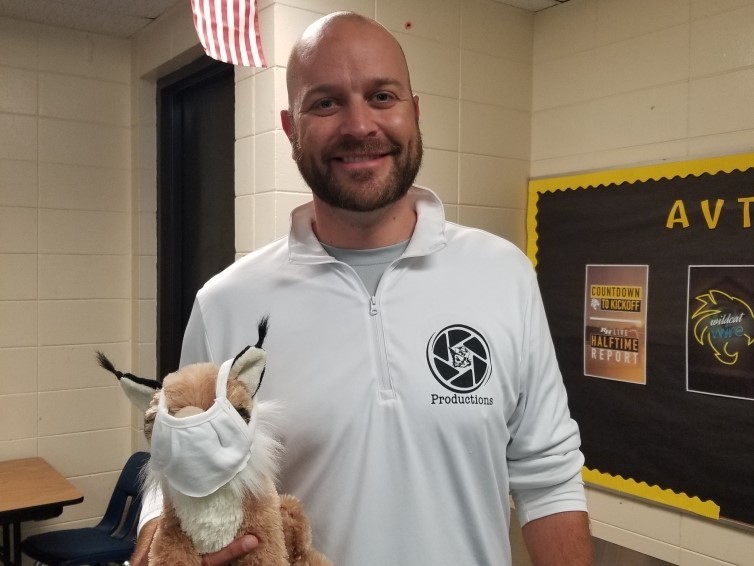 Richmond Hill High School loves to recognize the hard work of its teachers. Each week, a teacher is selected by their peers to win the weekly Wildcat Award! Each week's winner gets to proudly display "The Wildcat" in their classrooms.

This week's winner is Coach Patrick Means! The teacher who nominated Coach Means had this to say: “I would like to pass on the “Wildcat Teacher of the Week” to Coach Patrick Means. I have had the pleasure of observing his interactions with Students, Teachers and Administrators. He is always attentive and interactive in his dialogue with everyone who seeks his advice, in spite of the demands of his daily responsibilities. Coach Means teaches a full load of classes in addition to serving as Department Head of CTAE, Assistant Head Coach and manages a group of interns that produce the various videos produced for RHHS weekly. Where would we be without Wildcat News, Wildcat Wire, Wildchat and many other productions in support of RHHS. I have been impressed with the depth of his knowledge of TV and Movie Production, however I was most impressed with his ability to pass the knowledge along to his students. It is refreshing to see the students both past and present seeking out Coach Means for guidance and advice, for which he always finds the time. Many days I saw him walking to another appointment with his phone to his ear talking to his college contacts and coaches promoting RHHS football players. I proudly pass along the “Wildcat Teacher of the Week” to Coach Patrick Means.”

Thank you, Coach Means, for all you do for RHHS!