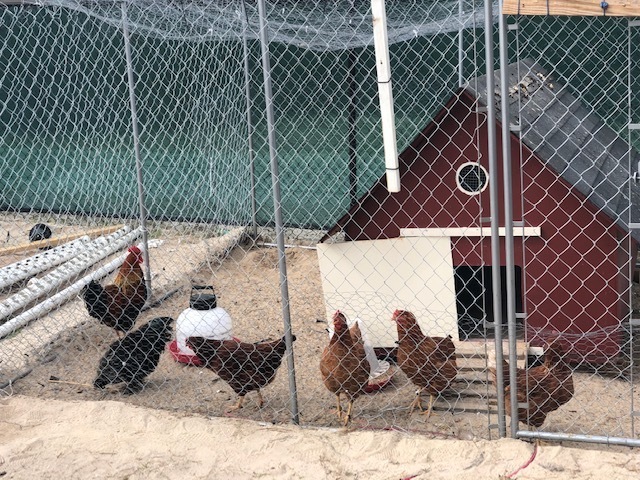 By: Aurelia Siplon and Anais Stuart

Richmond Hill Middle School´s entertaining STEM teacher, Mr.Melcher,  and his students have been raising chickens for about a year. Mr. Melcher has been teaching STEM for approximately 8 years, and this is his first full year of raising chickens. “There were some eighth-grade girls last year who came to me and said that they wanted to raise chickens and do the coops and all of that stuff,” he said.

Just like raising any animal, you have to have a reason. And they have a good reason, “Because we want to show sustainability,” Mr. Melcher says,” We want everything out there to be interconnected. The chicken droppings feed the fish, the fish water fertilize the plants, the plants feed the chickens, and the chicken's eggs feed us.”  However, the chickens aren't producing yet. According to Hannah Sahr, one of Mr. Melcher’s students,” They should start laying eggs after Christmas Break since they are still young.” The Program had a chicken last year that laid eggs. “We have had chickens lay eggs before, we probably will later,” Mr Melcher said,” but they aren't laying right now.” He added,” Last year, we only really had one chicken that laid, but she only laid about fifteen to twenty eggs before she died.”  He said, “Once they start laying again, we will hatch our own chickens. One of our roosters was actually incubated here.”

Sadly, the chickens they had last year died due to unfortunate circumstances. Multiple predators have attempted to get into the coop. To prevent that from happening, the students along with Mr Melcher helped to secure the coop. “ It takes a lot of work,” he said, ”When something got in there we would figure out how and fix it. We lost a lot of hens.” To secure the coop, they,  added chicken wire to the top and along the bottom of the coop.

Meanwhile, there have been many students in charge of taking care of the chickens. Over the breaks, “An eighth-grade girl and her family come out to care for the chickens,” he says. “Her name is Meredith Dobson. While in school, there are two sixth-grade boys that take care of the chickens.” We asked Mr. Melcher how the sixth graders feed the chickens. He joked and said, “We throw the food in and hope for the best.” This time seriously he said, “Really we have a feeder and they fill the feeder up a few times every week. And sometimes we throw tomatoes and other scraps in there as a treat.”

The chickens are one of the best attractions for non-STEM students and a most loved project for the STEM students. They are working on multiple projects for the chickens including a new chicken coop. It is evident that they will continue having chickens for a long time.