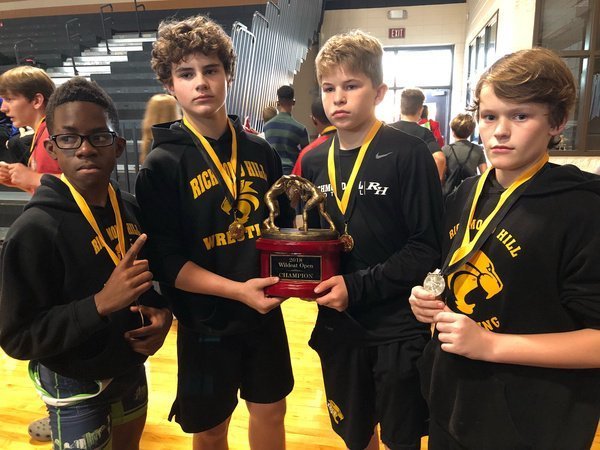 The Richmond Hill Middle School wrestling team started its fifth season off in a dominating fashion.  Here’s a rundown of the season so far, courtesy RHMS head wrestling coach Patrick Welch.   The team began the season by hosting the 2018 Wildcat Open and facing competition from area schools. With five teams and 160 wrestlers in attendance; the Wildcats were able to outscore the other teams and bring home the team title. Second place went to Risley Middle School and third place to Jane Macon Middle School.

On Wednesday, Nov. 14, the Wildcat wrestlers opened their duals season by travelling to Glynn County to face Glynn County Middle and Risley Middle in competition. The Wildcats defeated Glynn County 83-31 and Risley 103-23. This was a dominating performance with key wins by Caden Whittaker, Colin Dragon, Nathan Furman, Will Smith, Grant Eads and Lilly Brown.   The Wildcats are now 36-0 in duals competition and have been undefeated since the program began in 2014.