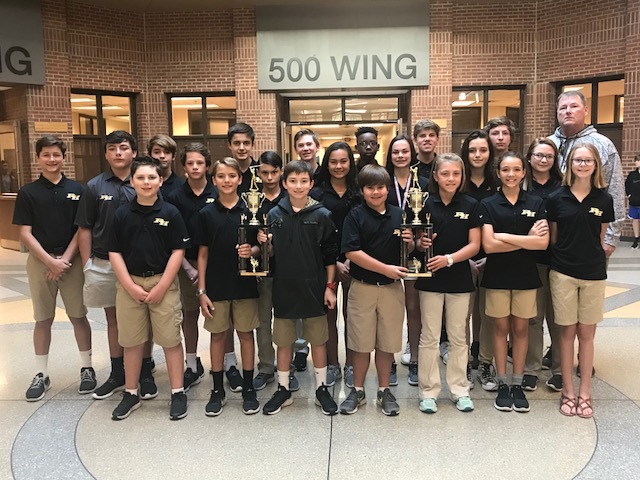 Congrats to the RHMS Boys and Girls golf teams for winning the Region Championships!  The Lady Wildcats won the schools 1st ever Championship. The Travel squad consisted of 4 girls; Samantha Lehr, Sofia Raye, Chloe Morton and Laikyn Pangilian. Samantha Lehr also won the LOW medalist for the girls division with a score of 47. Coach Boone bragged on Samantha, pointing out that she is an extremely talented and hard working young lady that has the potential to become a great golfer. Sofia Raye is a 7th grader that accounted for the Wildcats other score by shooting a 50. Coach Boone is excited about what this team accomplished, and is really excited about the potential of Sofia, and the rest of the young talent..

The RHMS Boys team shot the best score ever by an RHMS team!! The travel squad consisted of KJ Thomas, Samuel Reynolds, Jake Jones, Owen Magness, Kole Johnston, Owen Markgraf and Hayden Davis. KJ led the Wildcats with a 43, followed by Samuel Reynolds with a 44, Jake Jones 44, and Owen Magness 47, for a 178 total. Coach Boone was really impressed with the effort put forth by all the golfers, especially Reynolds, who was put out with two of the best golfers in the region (which shot 36/37) from South Effingham and William James.  Reynolds job was to keep the team close enough that our other golfers could win it for us.  They did exactly that! KJ, Jake and Owen played extremely well and demolished their opponents. Coach Boone says he is also excited for the future for this team, as it will be led by Reynolds and Markgraf, and some really good young talent.

Congratulations golfers and Coach Boone!  RHMS is proud of you!  #WeAreRHMS